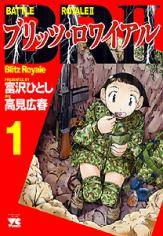 This manga was released straight to tankobon (graphic novel) format, therefore there was no serialization. However, a thirty page preview ran in Akita Shoten's Young Champion Magazine. The problem with straight to tankobon manga is that there is no indication whatsoever of when the next volume might be released. Though the author is the same, the artist has changed from the original manga. The realistic grit of Masayuki Taguchi has been replaced by the lighthearted cartooniness of Hitoshi Tomizawa. Also, though it is still written by Koushun Takami, the original story is based on the universe of the films rather than that of the original novel.