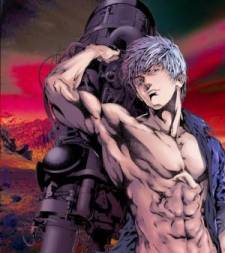 A remake and reimagining of the original series by Hara Tetsuo (Hokuto no Ken, Hana no Keiji) which ran from 1988-1989, with new art by Yoshihara Motoki. Cyber Blue: The Lost Children follows the story of Blue, a descendant of colonists from Terra who settled the distant world of Tinos in the 22nd Century. The brutal environment of Tinos forces humanity to rely on an artificial life support system implanted in the chest called the Biomatrix, in order to survive. In the 25th Century, Tinos is ruled by a Planetary Government bent on eradicating The Lost, dissidents who refuse to submit to its autocratic rule and are hunted down by its military for extermination. Through total control of Biomatrix production and issuing them to only those who submit to its authority, the Planetary Government enforces its will in an effort to finish off the Lost and their descendants, the Lost Children once and for all. Set in the dystopia of Junk City, Blue encounters Fats, a powerful robotic Artificial Intelligence, and the story of their meeting will change both man and machine, the fate of the Lost Children, and the course of human evolution forever.