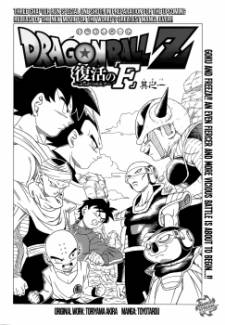 A fated clash!! A battle surpassing gods begins — !!!! After peace returned to Earth following the battle with God of Destruction Beerus, the surviving remnants of Frieza’s forces,Sorbet and Tagoma, approached, seeking the Dragon Balls. Their objective: to revive Frieza in order to bring his forces back to power. That worst wish in history is granted at last, and the resurrected Frieza plots his vengeance against Goku and the other Saiyans... And so, Frieza’s new army advances on Earth, and Gohan,Piccolo, and Krillin clash with a thousand soldiers. Goku and Vegeta challenge Frieza to a fated duel, but Frieza had attained an overwhelming power-up! “Allow me to show you… my further evolution!” Now, for warriors beyond their limits, the curtain was about to open on a battle like none before or since –. It Got A Set Of Three One Shot. More Like A Teaser For The Movie ! ~ MinatoAce