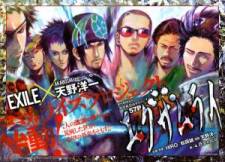 The year is 2718 by the Imperial Calendar, and ZIPANG (Japan) has crumbled in a huge battle against Majinki, terrors from the sky that are half beast and half machine. Hurting each other, warping their morals, unable to see a future, the people strive hard to survive each day. The war wiped out 70% of the human race, but amidst the darkness arose the seven members of the XILE Tribe to bring salvation to the race. But now, 500 years later in 3218, the wicked shadows of the Majinki have once again crept up upon them. This is the story of EXAMURAI, that of the XILE Tribe, who will fight to the death to protect their love, dreams and happiness. Having survived for 500 years since the events of 2718, the final battle of the seven members of the XILE Tribe begins under this azure blue sky... Based on the members of popular Japanese band, EXILE: Hiro, Atsushi, Takahiro, Makidai, Matsu, Usa and Akira.