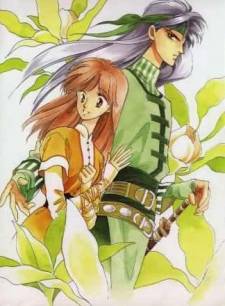 From Far Away, Dunia Mimpi, From the Other Side

Walking home from school one day, Noriko is innocently caught up in a terrorist bombing. Rather than being blown to bits, she finds herself transported to another world; a world in which darkness seems on the rise, as its powers desperately search for a being known as the Awakening whom it is said will awaken the Sky Demon. She finds this new world to be dangerous and overwhelming, and Noriko has little choice but to throw her lot in with the mysteriously powerful man she encounters upon her arrival. The enigma of this world and her role in it will gradually unfold, but first things first: Noriko must learn their language! In 2004, this manga won the 35th annual Seiun Award for best science fiction comic.