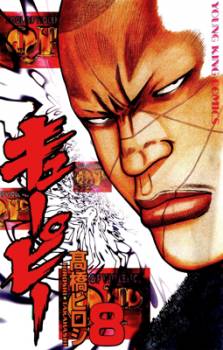 Children cry in fear just because his looks. QP (real name Ishida Kotori), known across the town as a legend who used to go to Bonten High, has returned after a four year absence. Working at a gas station, he's trying to live a quiet life, but his old best friend Azuma Ryou has something else in mind. Azuma intends to have Kotori stand at the top of the gang he has been building since high school. Despite his best intentions, is QP is forced to fall back into his violent ways?! After a four year absence, Ishida Kotori (QP) returns to the city where even his face instills fear amongst the locals. Trying desperately to move away from his once violent past and live an honest life, former classmate and now high profile gang member, Azuma Ryou, has other plans for QP's future... QP: Soul of Violence is written by Takahashi Hiroshi and set within the same universe as his other works, Crows and Worst.