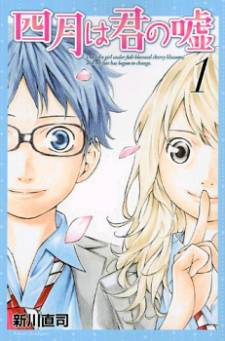 Kousei Arima was a piano prodigy until he became unable to play following the death of his mother, but his life brightens up when he meets violinist Kawori Miyazono. Under title: I met the girl under full-bloomed cherry blossoms, and my fate has begun to change. Nominated for the 2012 Manga Taisho Award. ---------------------- From MangaHelpers: Piano prodigy Arima Kosei dominated the competition and all child musicians knew his name. But after his mother, who was also his instructor, passed away, he had a mental breakdown while performing at a recital that resulted in him no longer being able to hear the sound of his piano even though his hearing was perfectly fine. Even two years later, Kosei hasn’t touched the piano and views the world in monotone, and without any flair or color. He was content at living out his life with his good friends Tsubaki and Watari until, one day, a girl changed everything. Miyazono Kaori is a pretty, free spirited violinist whose playing style reflects her personality. Kaori helps Kosei return to the music world and show that it should be free and mold breaking unlike the structured and rigid style Kosei was used to. [vyc]