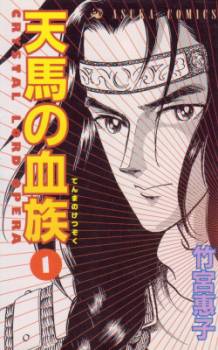 Crystal Lord Opera, The Clan of the Heavenly Horse, The Pegasus Bloodline, The Strain of the Pegasus

Altojin, a strong-willed warrior with a mysterious tattoo, was raised on the grassland plains of the country of Chigul in the time of Ghengis Khan. One day, while out hunting with the Imperial Prince Olsbolt, she saves his life from a would-be assassin. Olsbolt, suspecting that the assassin was sent by Biruge Han, his father and the reigning sovereign of Chigul, kills his father and thereby takes back his former lover who had become his father's wife. That night, Olsbolt goes to Altojin's home to hide, but while they were away for a moment, her entire family is slaughtered! What will become of the young warrior Altojin and the bold prince Olsbolt? And what mystery lies in Altojin's tattoo? Is it somehow connected to her family's assassination?