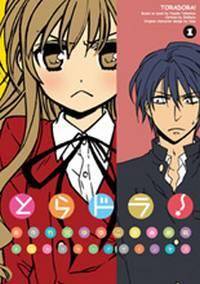 Toradora!s story begins with the male protagonist Ryuuji Takasu who is frustrated at trying to look his best as he enters his second year of high school. Despite his gentle personality, he has a natural outer-appearance which makes him look like an intimidating delinquent so he is utterly hopeless about his chances of getting a girlfriend anytime soon, and does not have many close friends either. After being greeted by his hungover mother in the morning, Ryuuji goes to school and is happy to find that he gets to be in the same class as his best friend, Y?suke Kitamura, and crush, Minori Kushieda. However, it is then that he unexpectedly knocks into &quot;the schools most dangerous animal of the highest risk level — Taiga Aisaka — who just happens to also be in his class.