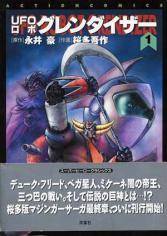 A short manga version of the UFO Robo Grendizer anime. Released along the anime series, UFO Robot Grendizer follows the adventures of Duke Fleed, the prince of Planet Fleed, who, disguised as Daisuke, a farm worker, fights against the forces that destroyed his planet, the Vegan Empire, also the creators of Grendizer that Duke stole to fight them. While not originaly considered part of the Mazinger series, Koji Kabuto and the Mazinger mechas appear in this series, making it sort of a sequel. Grendizer introduced the concept of a transformable robot and a space mecha, concepts that were later taken into other mecha series. It was extremely popular in Japan, Canada, France, Italy, and the Arab world and has a strong following in those countries even today.